During the general assembly of February 2021, the G3P consortium compiled a list of action items and one of those items was a user consultation. A survey was sent out to 132 potential users of the Global Gravity-based Groundwater Product (G3P) that is currently being developed. The main goal of this survey was to determine the requirements on spatial and temporal resolution of G3P. Last year, the preliminary results were already made available and now the full report, including the results of the follow-up survey, is published as well.

It was identified that potential users of G3P belong, in general, to the following types of users: policy makers, commercial users, academic users, general public, scientific and data organisations, and other. Based on this, 132 individuals from organisations belonging to the previous categories were contacted directly via email.

The survey was well received by most target groups, with commercial users and the general public being the groups with least respondents. One explanation to this could be that a reduced number of such organisations and individuals were contacted to answer the survey.

It appears that G3P is a product that will be useful for most organisations enquired and that there is interest in G3P among the defined target user groups. About 71% indicated that the G3P would have direct use in the support of water resources management, and more than half of the respondents saw a role for G3P in risk assessment for water security, drought monitoring or global hydrological models.

At the same time, the respondents are interested in having a clearer understanding of the uncertainties associated to G3P and its accuracy, which is something that the consortium will be taking into account when presenting the final product to the community later this year. In this regards, it was indicated that the most useful way to show uncertainty would be as confidence interval. Moreover, the participants indicated that it would be important/moderately important to have a quality assessment of the outputs generated at pixel level. The survey results also show that quality assurance should be reported through a QA layer with a reliability qualitative index.

Around half of the people surveyed would be satisfied with the current resolution of G3P, but a similar amount of potential users would like to have a higher resolution (below 0.1 or 0.25 degree). Also, it appears that the most preferred level of spatial aggregation is pixel, although large aquifers and large river basins where also chosen. Regarding G3P’s temporal resolution, most of the respondents would be satisfied with what has been offered, i.e. monthly. The most useful latency would be 1 month. Finally, regarding the dissemination of G3P data, it is appreciated to have available other ways of accessing it, but not necessary.

Later in 2021, a follow-up survey was produced to understand better the preferences of the previous participants regarding the accuracy of the product. The preferred accuracy of groundwater storage change that G3P needs to meet to be useful for the participants’ applications is 10 mm for the long-term trend of groundwater storage change (in mm water equivalent), and 5 mm for the change of groundwater storage from one month to another (in mm water equivalent). However, mixed answers were received when enquiring if the required accuracy scale with the size of the target region of the users’ applications. 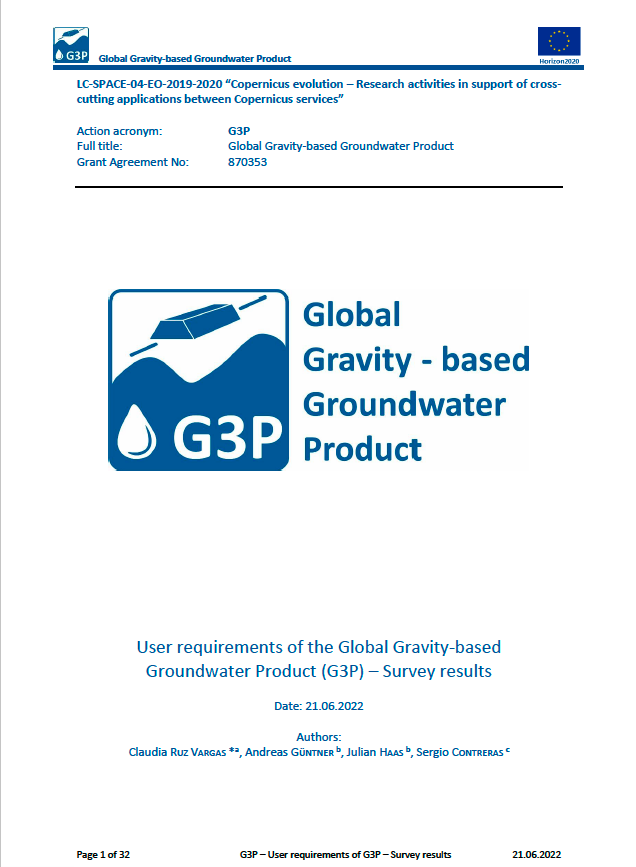